(Wentao Xu officially used and personally used before, as per pronunciation in Mandarin Chinese)

According to my paternal grandfather, I am a descendant from northern Viet Nam before Ming Dynasty, during which my ancestors migrated northward to Guangxi, China, where they remained and gradually intermixed with the Han people ever since. If this story is reliable, then it is likely that my ethnicity is partly Gin (京 in Chinese, Kinh in Vietnamese). However, the pedigree records nothing about this part of history, but says that we were Hoklo immigrants. Taking into account that faking pedigrees was not rare in ancient southern China, because then the Han people were considered superior to any other peoples, I am totally confused. Nevertheless, none of my paternal relatives nowadays speak the Gin language (a dialect of Vietnamese) nor Hokkien. They all speak Hâm Lim Yuet (粵語欽廉片). Since I was born in 1990 in Canton, Guangdong, my first language is Cantonese, the most influential dialect of Yuet. By contrast, my maternal pedigree is much less uncertain. They are definitely the Hakka people (客家人).

For curiosity I had my DNA tested. Although different databases give me slightly different results about specific percent of my ancestry composition, it is highly confident that my main composition is southern Chinese without detectable genetic composition from peoples from the north, such as northern Chinese, Korean, or Mongolian. My secondary source is Southeast Asian, which is not a surprise to me whatsoever, since my hometown is geographically in southeast Asia. The following result is calculated by DND.Land, as an example:

Note. Taiwanese here only refers to aboriginal peoples in Taiwan, such as Ami and Atayal.

By comparison, here is the result from 23andme: 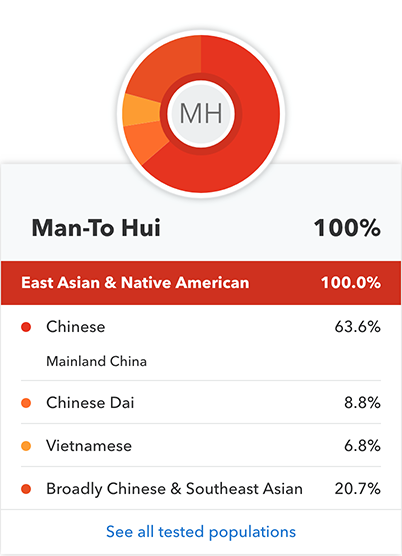 It seems to me that the definitions of Chinese by the two sites are similar, but there are still ambiguities in distinguishing southeast Asian peoples. Interestingly, I notice that a number of Vietnamese people, presumably, since they have Vietnamese names, have even fewer percentages of Vietnamese than I do. Anyway, I am 100% Man-To Hui, as indicated by the figure, which is good.

My Way to Astronomy

Honors and Awards in the Past ~Decade